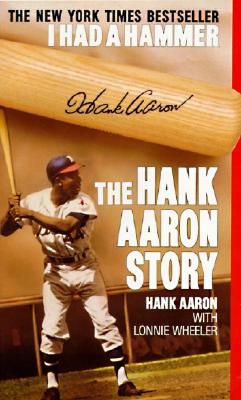 I HAD A HAMMER

Henry Aaron left his mark on the world by breaking Babe Ruth's record for home runs. But the world has also left its mark on him.

"Hammering Hank" Aaron's story is one that tells us much about baseball, naturally, but also about our times. His unique, poignant life has made him a symbol for much of the social history of twentieth-century America.

Raised during the Depression in the Deep South enclave of Mobile, Alabama, Aaron broke into professional baseball as a cross-handed slugger and shortstop for the Indianapolis Clowns of the Negro American League. A year later, he and a few others had the unforgettable mission of integrating the South Atlantic League. A year after that, he was a timid rookie leftfielder for the Milwaukee Braves, for whom he became a World Series hero in 1957 as well as the MostValuable Player of the National League.

Aaron found himself back in the South when the Braves moved to Atlanta in 1965. Nine years later, in the heat of hatred and controversy, he hit his 715th home run to break Ruth's and baseball's most cherished record--a feat that was recently voted the greatest moment in baseball history. That year, Aaron received over 900,000 pieces of mail, many of them vicious and racially charged.

In a career that may be the most consistent baseball has ever seen. Aaron also set all-time records for total bases and RBIs. He ended his playing days by spending two nostalgic seasons back in Milwaukee with the Brewers, then embarked on a new career as an executive with the Atlanta Braves. He was for a long time the highest-ranking black in baseball. In this position, Aaron has become an unofficial spokesman in racial matters pertaining to the national pastime.

Because of the depth and pertinence of Aaron's dramatic experiences, I Had A Hammer is more than a baseball autobiography. Henry Aaron's candor and insights have produced a revealing book about his extraordinary life and time.

Title: I HAD A HAMMER

Description: Paperback - [AARON & WHEELER] I HAD A HAMMER

I HAD A HAMMER