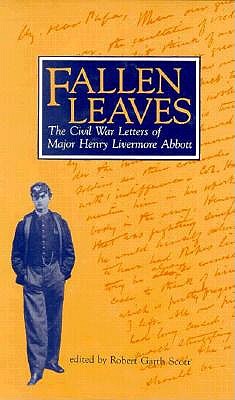 Major Henry Livermore Abbott of the 20th Massachusetts Volunteer Infantry was the most widely known and highly respected officer of his rank to serve in the Army of the Potomac. He distinguished himself in every battle in which he participated, from Ball's Bluff until the Battle of the Wilderness, where he died in command of his regiment. Fallen Leaves is a collection of Abbott's wartime letters to his family and friends, the majority published here for the first time. Robert Garth Scott's introduction contains a biographical sketch of Abbott that offers the most complete account of his life to date and, in his epilogue, recounts the details of Abbott's final battle and death. Also published with the letters are more than 30 photographs, many of them showing members of the 20th Massachusetts. Abbott's letters convey an immediacy which gives readers a sense of being part of an inner circle of friends and relatives. This quality lends itself to fresh and compelling reading for Civil War scholars, buffs, and general readers alike.