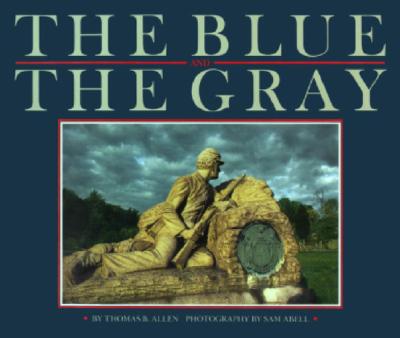 BLUE AND THE GRAY, THE

Hardcover - [ALLEN, THOMAS] BLUE AND THE GRAY, THE

"The American Civil War -- April to April, Sumter to Appomattox, 1861 to 1865 -- pervades the national conscience....It makes a great story...," writes Shelby Foote in his foreword to this volume. "I know of none since the "Iliad" that rivals it either in drama or in pathos...."

"The Blue and The Gray" tells that story, the epic of the first great modern conflict. In so doing, it raises issues still of urgent concern in many lands today: What unifies a diverse nation? What justifies the formation of a new one? What sustains democracy and law in the range of the guns? What peace can follow the loss of 600,000 lives?

Six chapters cover the conflict chronologically. Key characters in the saga are examined in biographical sketches throughout the volume, and a picture-and-text portfolio on a major social or technological theme accompanies each chapter. The book features color illustrations by National Geographic photographer Sam Abell and text by Thomas B. Allen, formerly a Society staff editor and a specialist in military studies. A judicious selection of historical photographs, specially commissioned new maps, and maps from the Civil War era enrich the pages.

While tracing the drama of the battlefield, "The Blue and The Gray" lets the reader meet individuals of the 1860s -- on both sides of the front lines. Their own words, eloquent or earthy, funny or pitiful or noble, express the ideals they lived by and died for as family members fought one another and the war toll became the highest in American history.

With accompanying guidebook and map supplement, this volume is designed to show and explain why, in Robert Penn Warren's words, "The Civil War is, for the Americanimagination, the great single event in our history," and why, in the opinion of Abraham Lincoln, it would affect "hope to the world for all future time."

Title: BLUE AND THE GRAY, THE

BLUE AND THE GRAY, THE