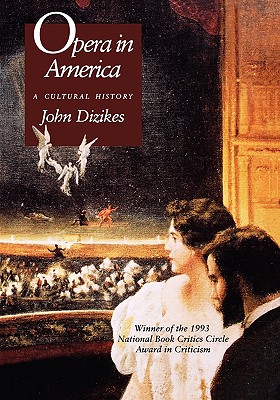 "I hear the chorus, it is a grand opera, Ah this indeed is music-this suits me."-Walt Whitman, "Song of Myself" America has had a love affair with opera in all its forms since it was first performed here in colonial times. This book-the first comprehensive cultural and social history of musical theater in the United States-includes vignettes of productions, personalities, audiences, and theaters throughout the country from 1735 to the present day. John Dizikes tells how opera, steeped in European aristocratic tradition, was transplanted into the democratic cultural environment of America. With a wealth of colorful detail, he describes how operas were performed and received in small towns and in big cities, and he brings to life little-known people involved with opera as well as famous ones such as Oscar Hammerstein, Jenny Lind, Gustav Mahler, Enrico Caruso, Milton Cross, Maria Callas, and Leonard Bernstein. He tells us about the often overlooked African American contribution to operatic history, from nineteenth-century minstrel shows to the work of Scott Joplin and Marian Anderson, and he discusses operetta and Broadway musicals, recognized everywhere in the world as one of the triumphs of American twentieth-century art. Dizikes considers the increasingly diverse operatic audiences of the twentieth century, shaped by records, radio, and television, and he describes the places where opera now flourishes-not only New York, Chicago, and San Francisco, but also St. Louis, Boston, Dallas, Houston, Santa Fe, Seattle, and elsewhere. Generously illustrated and engagingly written, the book is a fitting tribute to its subject-as grand and entertaining as opera itself.