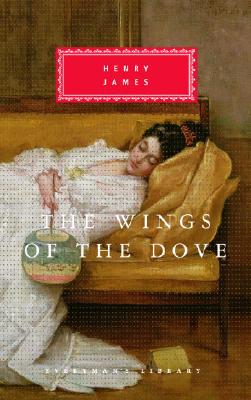 WINGS OF THE DOVE, THE

Hardcover - [JAMES, HENRY] WINGS OF THE DOVE, THE

Of the three late masterpieces that crown the extraordinary literary achievement of Henry James, "The Wings of the Dove" (1902) is at once the most personal and the most elemental.
James drew on the memory of a beloved cousin who died young to create one of the three central characters, Milly Theale, an heiress with a short time to live and a passion for experiencing life to its fullest. To the creation of the other two, Merton Densher and the magnificent, predatory Kate Croy, who conspire in an act of deceit and betrayal, he brought a lifetime's distilled wisdom about the frailty of the human soul when it is trapped in the depths of need and desire. And he brought to the drama that unites these three characters, in the drawing rooms of London and on the storm-lit piazzas of Venice, a starkness and classical purity almost unprecedented in his work.
Under its brilliant, coruscating surfaces, beyond the scrim of its marvelous rhetorical and psychological devices, "The Wings of the Dove "offers an unfettered vision of our civilization and its discontents. It represents a culmination of James's art and, as such, of the art of the novel itself.
(Book Jacket Status: Jacketed)

Title: WINGS OF THE DOVE, THE

WINGS OF THE DOVE, THE